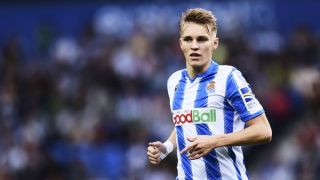 Imanol Alguacil on Martin Odegaard: “I think at no time has there been an option for him to come”

Martin Odegaard is, according to Diario AS, a matter of hours away from becoming an Arsenal player. The Norwegian will arrive in London on a loan deal after he found it tough to find minutes under Zinedine Zidane at Real Madrid.

The move will come as a disappointment to many La Liga fans, who’d hoped to see Odegaard stay in Spain. He had been heavily linked with Real Sociedad, the club with whom he spent last season on loan and thrived at.

Madrid actually recalled him from that planned two-year spell because he’d performed so well – they thought he’d be better served at the Santiago Bernabeu.

Imanol Alguacil, La Real’s coach, was asked about the possibility of his team signing the playmaker in his press conference before the Basque club faced Real Betis. “I think at no time has there been an option for him to come,” Alguacil revealed.

“Of course we wanted him to come, for all he showed and for what a good player he is, and because the team would grow with him. But he’s never been an option, so there’s nothing to say about it.”

Alguacil also spoke about Willian Jose, who’s close to sealing a move to Premier League side Wolverhampton Wanderers, and Carlos Fernandez, the Sevilla striker they’re close to bringing in.

“We’re going to be cautious, but there’s no doubt he won’t be with us because the negotiations are advanced both with Willy and Carlos Fernandez,” Alguacil said. “Advanced, but not signed, so be cautious. We won’t have him for Betis, but we’ll wait until everything’s closed.”