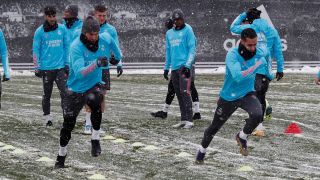 Zinedine Zidane may have considered making changes to the side following on from the weekend’s goalless draw at Osasuna, which saw his side produce a mundane performance.

Martin Odegaard and Fede Valverde remain frozen out of the starting line-up, while Eden Hazard and Marco Asensio both line up alongside Karim Benzema in attack.

Athletic Club have named the starting XI that was anticipated, with Inaki Williams partnering Raul Garcia in attack – while the influential Iker Muniain will start on the left side of their midfield four.

The two sides are competing for the right to face Barcelona in Sunday’s final – the Blaugrana saw off Real Sociedad in Wednesday evening’s semi-final following on from a penalty shootout.