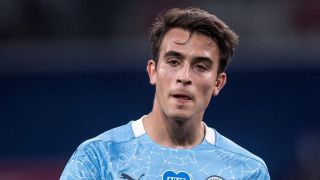 Eric Garcia is close to becoming a Barcelona player again according to a report in Diario Sport.

The move will happen either now or in June, when the Catalan’s contract with Manchester City is set to expire. It could happen this winter, however, if Barcelona can negotiate a favourable price with City and the incoming president gives his OK to the deal.

Barcelona have apparently signed a pre-agreement with Garcia for the next five seasons, with the option of an additional half if they can force through the move this window. The Blaugrana are negotiating with City to make this happen.

Garcia has been clear in his desire to return to Barcelona, the club he left to join Pep Guardiola‘s City in 2017, ever since last summer, but the club wanted to wait until January 1st to present the official documentation so as to not violate the rules. The contract City offered him was more lucrative financially.

The idea is for Barcelona and the English club to agree a low transfer fee to be paid from July 1st, with the number thought to be around €6m. Both clubs are haggling over variables in the deal as well as a potential percentage in any future sale of the player.