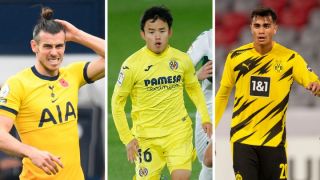 The loan system isn’t working for Real Madrid this season according to Diario AS.

Aside from Borja Mayoral and Brahim Diaz, the players sent out to gain experience and game-time have struggled to make their mark. Take Kubo, Jesus Vallejo, Dani Ceballos, Gareth Bale and Reiner Jesus have all failed to become important figures at the club they’ve gone to.

Mayoral is taking advantage of the opportunities he’s being given at Roma, where he’s generally second banana to Edin Dzeko in Serie A but of more importance in the Europa League.

At Milan, Brahim has become a key asset to the Italian club, again shining more in Europe than domestically, and is the only Madrid loanee who’s seen his market value grow during his spell away.

Vallejo, playing centre-back at Granada, and Ceballos, a central midfielder at Mikel Arteta‘s Arsenal, are both gaining minutes but failing to really stand out and impress.

Kubo played most of his football while at Villarreal in the Europa League, and has been given so little game-time in La Liga that he’s on his way to Getafe for the second half of the season.

There had been high hopes that Jose Mourinho and Tottenham Hotspur would get the best out of Bale, but the Welshman has been unable to find a consistent run in the team and hasn’t played since December 23rd.

Reiner, whose destination of Borussia Dortmund seemed ideal, is finding it difficult to earn game-time, playing just 136 minutes for the German club. They appointed a new coach in mid-December in Edin Terzic, but the Brazilian has been barely available to him due to muscle problems.