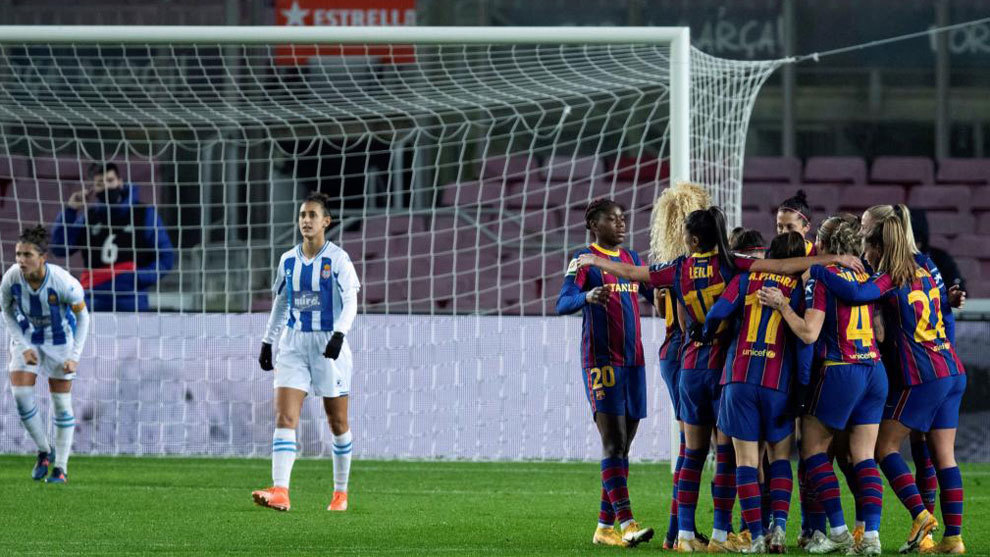 Primera Iberdrola got up and running for 2021 with a round of (mostly) local derby fixtures. Spare a thought for the players of Deportivo Abanca, whose ‘derby’ fixture saw them make the long journey to Tenerife on 5th January and go home with a 4-1 defeat.

A historic day – but business as usual for Barça.

Fifty years ago, Selecció Ciutat de Barcelona, who the club regard as the forerunners of their official team, played in front of 60,000 fans in the stadium as a prelude to a first team friendly against CSKA Sofia. In 2021, no fans were allowed into the stadium, but Barcelona put on an exhibition fitting of the occasion.

They were made to wait though. Espanyol sat deep and held out for longer than anyone has managed thus far this season and it was only in the 45th minute that Alexia Putellas broke the deadlock, becoming the first woman in half a century to score at the Camp Nou.

Once the floodgates had opened there was no stopping the champions, Marta Torrejón, Melanie Serrano, Lieke Martens and Ana Crnogorcevic added further goals to extend their perfect start to the season.

Real Madrid’s full backs are vital – at both ends

One of the most interesting aspects of Real Madrid’s play in their win over Madrid CFF was how much of the ball their full backs see – and in such advanced positions. 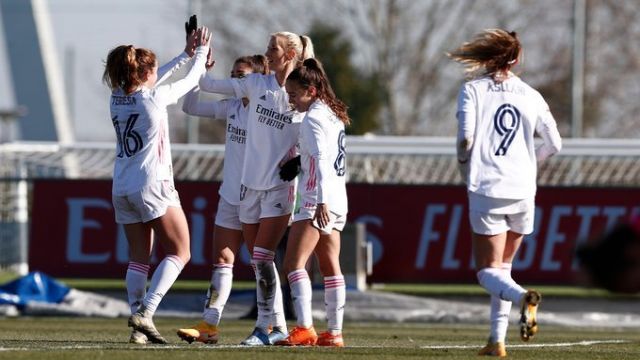 Kenti Robles on the right and Olga Carmona on the left seemed to spend as much time in the opposition half as in their own and were a constant option on the overlap for the players ahead of them.

The number of options out wide meant a constant supply of crosses coming in and it was from one cross from the right that Sofia Jakobsson opened the scoring with a brilliant first-time volley just before the break.

Madrid looked to encourage this, their game plan largely revolved around sitting deep and then releasing their three pacey forwards early to get behind Real Madrid’s two centre halves. This almost paid dividends on a few occasions, but the clearest opportunity came right at the start of the second half when they were able to get a three-on-two situation. Goalkeeper Misa came out early to try and close off the angle for the shot, but a quick pass looked to have left Geyse with an open net to aim for only for Olga, who had made a superb run back to cover, to put her body in the way of the ball and prevent a certain goal.

Olga then underlined her attacking ability, she is more naturally a winger than a full back after all, by contributing to the passing move which saw her side double their lead, with the fine finish applied by Marta Cardona.

Twice Valencia took the lead against Levante in the city derby at Paterna, twice they were pegged back before conceding from a penalty with virtually the final kick of the game.

The scorer of Levante’s first two goals was Esther González, who took her tally for the season to 13 goals in 13 appearances, extending her lead in the pichichi rankings with nearest rivals Ludmila and Kosovare Asllani not playing and drawing a blank, respectively.

Esther’s form could make all the difference for Levante, who after a slow start are climbing the table rapidly and are right in the middle of the battle for Europe. Wednesday’s win saw them go ahead of Atlético Madrid, while their opponents at the weekend are UDG Tenerife, who are only two points ahead of them.

Elsewhere, Atlético Madrid conceded an injury time equaliser to draw 1-1 with Rayo Vallecano to slip further off the pace at the top. Some good news for Atlético is that the club has confirmed protocol is in place for fans to return to their home matches starting with this weekend’s fixture against Valencia.

Real Betis’ miserable run continued with a 2-0 defeat in their derby with Sevilla, and although it’s early in the season, their match with Deportivo at the weekend is starting to look like a relegation six-pointer.