36 percent of Real Madrid fans have called on the club to prioritise the return of Brahim Diaz from Milan this summer ahead of the other six first-team squad players out on loan.

Real Madrid news has focused in recent times about bringing the wage bill down as the club may seek further permanent exits this year.

A poll in Marca asked Madridistas which of the seven players currently away on loan they would rather see return next season, with 36 percent selecting the playmaker. 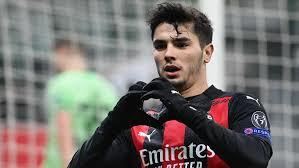 The 21-year-old has netted just one Serie A goal so far for the Milanese giants but did hit three goals in this season’s Europa League group stages – home and away against Celtic, alongside a goal against Slavia Prague.

Next up in the poll was for none of the players to return to Los Blancos, with 27 percent of fans selecting that option with Takefusa Kubo – currently at Villarreal – picking up 19 percent of the vote.

Arsenal’s Dani Ceballos was selected by 10 percent with Gareth Bale – currently at Tottenham – on 3 percent.