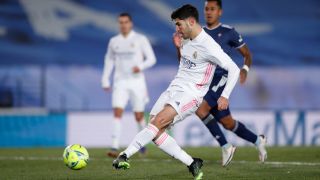 Real Madrid have extended their lead over Celta Vigo to 2-0 in La Liga action at the Estadio Alfredo di Stefano.

Iago Aspas goes close at one end, but Madrid go straight down the other end to take the lead! 😱

Dani Carvajal was inches away from doubling Real Madrid’s advantage just before as his spectacular volley dropped just wide of the post.

However, the hosts only had to wait for nine minutes into the second period for Asensio to finish off a flowing team move.

Luka Modric and Casemiro quickly recycled possession in the Real Madrid midfield before the Croatian released Asensio to calmly tuck past Ruben Blanco.

With Iago Aspas having just gone off injured, Celta find themselves in a very tough spot now 😬 pic.twitter.com/Ls6HUY2Tfv

Zidane is likely to rotate his options in the final half hour to rest certain players for a busy run of games in January with Luka Jovic, Martin Odegaard and Isco potential options off the bench.