After breaking the club record longest unbeaten streak, now at 19 games across all competitions, Unai Emery will enjoy Christmas with his Villarreal side sitting in the Champions League positions, with the top spot of their Europa League group achieved as well.

Though only one of the yellow submarine’s last six La Liga matches have yielded all three points, the team are playing with freedom and style in attack, coupled with solidity and confidence in defence. All the while, they bear the brunt of a brutal calendar packed with league, cup, and European duties which has brought about its ninth muscular injury across the squad this week when captain Mario Gaspar had to come off in the 1-1 draw with Athletic Bilbao.

Emery has missed some vital components to his side that would add a lot of width and dynamism, potentially turning some of those recent frustrating draws into wins. Paco Alcácer, Carlos Bacca, Pervis Estupiñán, Moi Gómez, Gerard Moreno, Juan Foyth, Dani Parejo and Francis Coquelin have all missed game time this season with muscular injuries, no doubt a product of the condensed season and lack of a real pre-season to prepare players’ bodies for what will be one of the most gruelling campaigns in memory. 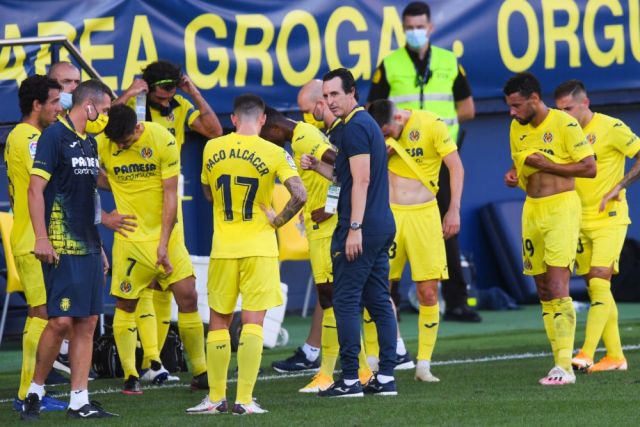 Yet, the former Arsenal manager has his team extremely well-drilled and incredibly difficult to beat. Only Barcelona have gotten the better of them this campaign, in a strange game where it seemed the Catalans scored with all their earliest chances and ended the game as a contest early.

Central to the yellow submarine’s success has been the flying form of Pau Torres, the 23-year-old central defender from the town of Villarreal that grew up in the club’s academy. Torres’s fine performances are putting him in contention to be one of the national team’s starting defenders at next summer’s European Championships. He showed his worth yet again this midweek with an incredulous headed clearance on the line while running backwards to block

Álex Berenguer’s shot that had beaten the keeper.

The youngster plays with fantastic composure in the heart of Villarreal’s defence, very comfortably bringing the ball out from the back to start attacks and sweeping up with brilliant positional play off the ball. He has been productive in the opponent’s box as well, with a goal against Real Betis in week 13 to add to his strike against Valladolid earlier in the season, and he nearly bagged a later winner over Elche in week 12. In phenomenal form and leading a team riding high in the league, Torres has attracted the interest of some of the biggest clubs in Spain and abroad already, and a bright future for the center back is certain.

Without his headed clearance on the line, Athletic Club would have taken a 2-0 lead, which may well have been enough to see out the win. Yet, Villarreal fought back and earned a point with a fantastically taken goal by 18-year-old Yeremi Pino, one of the revelations of this La Liga season, given an opportunity to shine given the amount of injuries Emery must deal with. The goal was Pino’s third of the season and first league career goal.

Gerard Moreno’s brilliant headed assist from outside the box looped over the Basque defence to set the youngster on his way to smash in a half-volley to level proceedings. Pino has been winning a lot of plaudits for his recent performances, not looking one bit out of place in his debut campaign in Spain’s top tier.

– Eibar will always leave the space behind their defensive line to be exploited. They take a brave approach deploying a very high defensive line, coupled with aggressive pressing from the front. It’s a style that has brought about a lot of success in the past, and one that nearly sparked a brilliant comeback against Real Madrid in week 14, and that saw them pick up points against Real Betis, Real Sociedad, and Valencia recently.

However, the opposite side of the same coin saw them lose the lead this midweek against Deportivo Alavés with a breakaway goal to Édgar Méndez. Pablo Machín’s men played without star striker Lucas Pérez but relied on their fast wingers to break quickly in transition, and an excellent counter-attack with the ball won in the Eibar back line brought about the levelling strike.

The game was huge for how the relegation picture could turn out at the end of the year, with both sides struggling around the bottom of the table coming into the game. Three points against a direct rival will be the perfect Christmas present for Alavés, putting some breathing space between them and the drop zone.

– The same could not be said for either Elche or Osasuna, who played out a 2-2 draw in another game that could define the relegation battle come late May. The draw leaves los rojillos bottom while Elche are just one point off the bottom three.

– At the other end of the table, Real Madrid and Atletico Madrid sit level on points, with the Colchoneros edging the leadership on goal difference, and with two games in hand on Los Blancos. It’s the first time since 2006 that a team other than Real Madrid or Barcelona sat first in the table on Christmas, when Juande Ramos’s Sevilla were flying high.

Atleti overcame the challenge of Real Sociedad 2-0 with a brilliant Hermoso header to break the deadlock and hand all the advantage to Diego Simeone’s side, in the coach’s 300th win as Atleti manager. Marcos Llorente put the result beyond doubt to raise his tally for the season to six in a breakout season for the transformed midfielder. 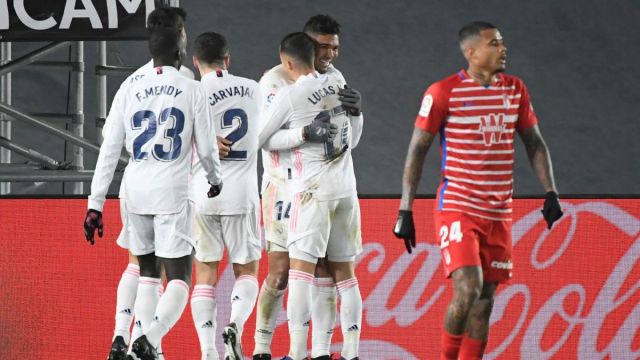 Across the Spanish capital, Zinedine Zidane’s men showed a level of maturity to overcome yet another game that could have been a potential banana skin for them. After their crunch week of games against Sevilla, Borussia Mönchengladbach, and Atletico Madrid that could have decided the fate of the French manager if there were any major stumbles, the champions have fallen back in love with winning game after game, and have now strung five victories together, showing the type of form that won them the title last season.

– Barcelona comfortably beat Real Valladolid 3-0 lining out with three central defenders, in a new formation that gave the side more solidity against counter attacks and more sense moving forward, with fewer players crowding the middle of the pitch.

Messi and Pedri played behind Martin Braithwaite and were flanked by Jordi Alba on the left and Sergiño Dest on the right. Pjanic and De Jong provided stability in holding midfield positions. Lenglet, Araújo, and Mingueza defended the back line, with Coutinho and Griezmann being the high-profile losers of this new shape. 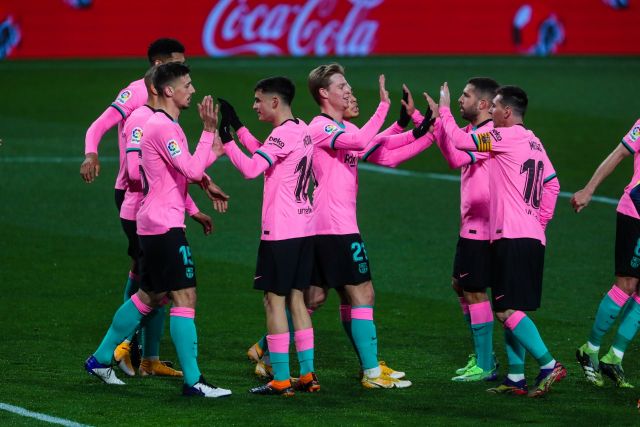 18-year-old Pedri set up Messi with a beautiful backheel rolled pass for the Argentine to score his 644th goal for Barcelona, now beating Pelé’s previous record of 643 strikes for the one club.

– Real Betis boss Manuel Pellegrini said his team’s win over Andalusia rivals Cádiz was a “step forward” against a team that knows how to tactically outwit plenty of La Liga counterparts, including Real Madrid, Barcelona, and Athletic Bilbao.

🗣️ Stay tuned to #LaLigaTV for all the post‐match analysis.

Los Verdiblancos have shown a lot of promise under the former Manchester City boss but have failed to string results together and turn the excitement that surrounds them into a proper charge at the European positions. The side from Seville have only won back-to-back games in the first two weeks of the season, and despite sitting 9th in the table, Betis registered just their 5th clean sheet of this term against newly promoted Cádiz.

The manager explained that his side needed to show “patience” against a team that likes to sit deep, let the opposition play, and feed off errors, but lamented that in the first half his players confused “patience” for “sluggishness.” Midfielder Guido Rodríguez decided the game with his first goal of the season.

Damian Suarez with an absolute STUNNER! 😱

What a way to put Getafe in front 🔵 pic.twitter.com/RHxfflDXJw