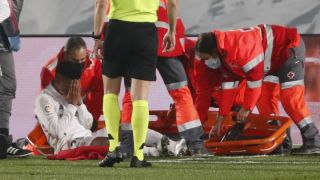 Real Madrid forward Rodrygo Goes was stretchered off in the first half of his side’s La Liga clash against Granada on Wednesday with a muscular injury.

The Brazilian was replaced ten minutes before the break with what appeared to be an injury to his right thigh, with the player stretchered off and appearing to be in tears due to the pain.

The player appeared to collapse awkwardly to the ground following on from a challenge with Granada defender Dimitri Foulquier, although the injury did not appear to be one caused by any impact.

He was then substituted off following several minutes of treatment, to be replaced by Marco Asensio.

There are no early indications of how long Rodrygo is likely to be sidelined for, with tests due to be carried out in the next 48 or 72 hours, as per Diario AS.

The 19-year-old, formerly of Brazilian club Santos, was making his fifth league start of the campaign.