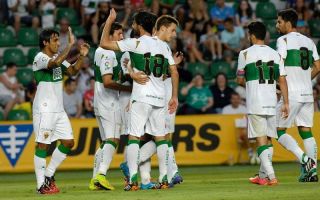 Elche host Osasuna at Estadio Martinez Valero in a game that could be crucial come the end of season relegation battle.

Elche, newly promoted, started the season well but a recent slump in form has seen them fall to 16th place in the table. Osasuna, who’ve lost eight of their opening 13, are rock-bottom.

The hosts could – given the congested nature of the league table – climb as high as tenth with a win, while the visitors could theoretically propel them outside of the relegation zone. Both outcomes would be heavily dependent on improbable goal swings.

Diego Gonzalez and Omenuke Mfulu miss out for Elche through injury problems but otherwise have a full squad to choose from, although coach Jorge Almiron will miss out after testing positive for Coronavirus. They’re expected to line up in a 4-4-2.

Osasuna are missing five first team players. Aridane Hernandez is suspended while Jony, Lucas Torro, Juan Perez and, of course, Chimy Avila are all injured. They generally favour a 4-3-3.