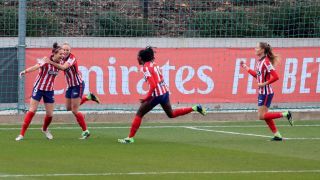 In the build-up to this historic first Madrid derby in women’s football the narrative was of a shift in the balance of power in the capital.

Real Madrid are unrecognisable from the Tacón side which finished mid-table last season and since they were humbled by Barcelona on the opening weekend, they had picked up 25 of a possible 30 points. 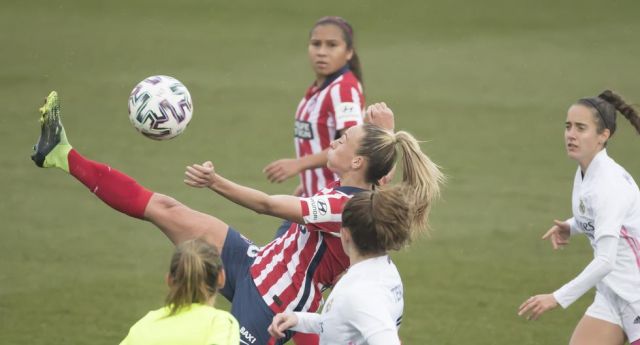 In contrast Atlético have struggled to bed in the eleven new signings they recruited over the summer and there is a real sense that coach Daniel González still does not know his best team. Last weekend they were defeated 1-0 at home by Madrid CFF, their first league defeat by someone other than Barcelona in just over three years and they went into Saturday’s game trailing the new kids on the block by four points in the table.

But with only five minutes on the clock, it was Atlético who took the initiative. Dutch defender Merel van Dongen has been a goalscoring heroine for them on a couple of occasions already this season, but this is by far the most important one, lashing the ball home from close range as the ball broke to her from Deyna Castellanos’ corner while the Real Madrid players appealed in vain for a handball.

And that was enough to get the win as the Atlético defence shut down the space that Kosovare Asllani normally thrives on and the Swedish forward cut a frustrated figure before being substituted five minutes from the end of normal time. 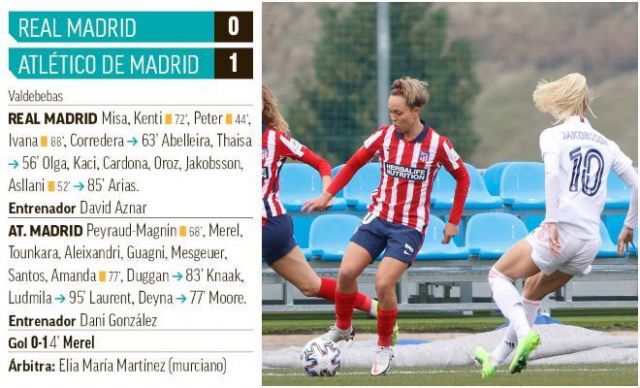 If Real Madrid continue to develop at the pace they have started at, this could quickly develop into one of the great rivalries in women’s football. But for now, at least, Madrid is rojiblanca.

Peke could make the difference for Depor

Last season, Deportivo Abanca’s Peke was the third top goalscorer in the league – only Barcelona’s Jenni Hermoso and Asisat Oshoala scored more than her – and her form was enough to earn her a place in the Spain squad for the first internationals of the new season.

However, after missing out on her international debut (one wonders what would have been lost by giving her a run out as a substitute against Moldova when Spain were 6-0 ahead at half time) she struggled for form and fitness, missing several games as Depor remained pointless and rooted to the bottom of the table.

But since the last international break, in tandem with strike partner Athenea del Castillo, she has shown the kind of form which won her so many fans last season and dragged Depor back from the brink to have a real chance of staying in Primera Iberdrola.

But on Saturday afternoon away to Madrid CFF, it looked like Depor’s min-revival had hit the buffers. A defensive mix-up handed Geyse a simple finish to put the hosts ahead and although Depor had plenty of possession in the final third, they just could not translate it into chances until right at the end.

Madrid goalkeeper María Sampalo had been a virtual spectator for most of the game but looked to have earned her side the win with two excellent saves in stoppage time.

But then Peke showed that if you have a sight of goal, sometimes it is best to just go for it. Her shot may have taken a slight deflection on its way in, but there was no taking the credit away from her.

Rayo put off-field issues behind them

The start of this season has been rough for Rayo Vallcano’s women. Unable to start pre-season training at the same time as the rest of the clubs in the league, forced to throw a squad together in the last few days of the transfer window and denied access to the same facilities at the training ground as the men – these are situations that no top-level football club should be subjected to.

Their plight reached wider attention a couple of weeks ago when images of the ‘meal’ – a couple of apples and sandwiches featuring low-quality ham – the club supplied for the players on their bus trip back to Madrid after playing Levante went viral on Twitter. The players also complained that they have not received the promised salary increases and that the club is breaking Covid-19 protocols by having them travel to games in cramped buses where social distancing is impossible.

There was talk that they would protest these conditions by refusing to play an away game at Real Sociedad, but in the event the game went ahead, and another damaging defeat saw them stuck in the relegation zone. But they have responded in the best possible way – by letting their football do the talking.

First with a 3-0 home win over Eibar last weekend and then a midweek victory over Sporting Huelva – both fixtures which even at this stage of the season can be classed as relegation six-pointers – and then on Saturday, an impressive 0-0 draw against Athletic Club in Bilbao. Collecting seven points in seven days has lifted them out of the relegation zone and up into mid-table.

Barça hit the front (at last)

In an ominous sign of what’s to come for the rest of the season, Barcelona finally reclaimed top spot on Saturday with a 6-0 win over Sevilla – the second time they’ve hit six without reply against the Andalucian side already this season.

Although both missed out on the major prize at FIFA’s ‘The Best’ ceremony midweek, Caroline Graham Hansen and Jenni Hermoso were in no mood to let it affect their game going forward. Graham Hansen supplied the assist for Alexia’s 11th minute opener and after Hermoso had doubled the lead from the penalty spot, she provided the pass for the Norwegian to put the game beyond doubt on the stroke of half time.

Subs Oshoala and Aitana completed the rout after the break and with UDG Tenerife surprisingly being held at home by Sporting Huelva, Barça moved level with them on 27 points, but ahead courtesy of their massively superior goal difference.

The really worrying thing for the chasing pack is that the champions still have three games in hand and should they win all three of them, the chances of them being caught will appear minimal at best.

Fans of EDF Logroño haven’t had too much to cheer this season ever since their penalty shootout win over Athletic Club back at the start of October which booked their spot in the Copa de la Reina final.

Going into the weekend’s fixtures they were bottom of the table and had the dubious distinction of being the only club in the league yet to record a victory and last week their big summer signing, former Barcelona and Atlético forward Olga García, suffered a cruciate ligament injury which almost certainly means her season is over.

But despite all this, if they were to get off the mark, they weren’t going to have a better chance than against a Betis side which has slumped in form since mid-November and lost five consecutive games to sink into the relegation zone.

And indeed by the end of the afternoon, they would be sitting bottom of the table as Logroño walked off with a cherished win. They can now look forward to closing out 2020 against Athletic Club with a huge weight lifted off their shoulders.