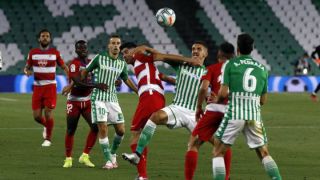 Granada and Real Betis announce lineups ahead of all-Andalusian affair

Granada and Real Betis have released their respective starting lineups ahead of this afternoon’s all-Andalusian affair at Los Carmenes in Granada.

Granada are without Neyder Lozano, Jesus Vallejo, Angel Montoro and Victor Diaz through injury while Betis are missing Victor Camarasa and Sergio Canales.

Granada have put together a four-match unbeaten run after a bad streak of losing four out of their previous five. They have failed to win any of their last three home games, however.

Betis are in a similar boat, recovering well from a difficult period to emerge unbeaten from their last three competitive games, taking four points from their last six in La Liga.

Granada are currently in eighth level with Cadiz, a point behind Celta Vigo and a point ahead of Athletic Club. Betis are just below Athletic, just two points behind Granada. Victory could see Betis jump above their hosts for the afternoon.