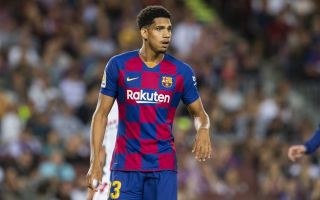 A surprise pre-match was Clement Lenglet‘s demotion to the bench and coach Ronald Koeman‘s decision to field the youthful pair of Ronald Araujo and Oscar Mingueza at centre-back.

Koeman has proven to trust Araujo as an able starter in the absence of the injured Gerard Pique. The Uruguayan is very strong defensively and capable in handling rival forwards as explained by Mundo Deportivo.

He was superb against La Real. Dominant aerially, quick to cut out nascent attacks and strong in the challenge, he has all the attributes to be a top central defender.

He’ll be hoping to stake his claim in these next few months as Barcelona’s premier centre-half for the next few years after his period injured. Still just 21, he has a bright future ahead of him.