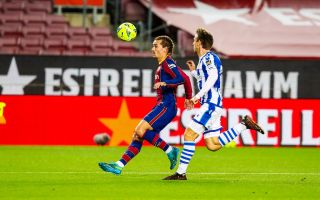 Ronald Koeman: “You can’t control a game for 90 minutes”

Real Sociedad travelled to face Barcelona flying high and sitting at the top of La Liga.

The Basque side were level on points with Atletico Madrid and Real Madrid heading into the clash and have earned plaudits throughout the land for their stylish brand of football.

Barcelona, by contrast, are struggling this season, sitting eighth before kick-off and only managing to finish second in their Champions League group.

The form tables turned on Tuesday evening in Catalonia, however, with the hosts recording a pivotal 2-1 victory over their Basque visitors.

Willian Jose opened the scoring for the visitors before Jordi Alba and then Frenkie de Jong turned the tie on its head.

Ronald Koeman, speaking after the match in comments carried by Diario Sport, was pleased with his team’s performance.

“It was a good first half,” he said. “We were very good with the ball and we pressed well. We had chances and the 2-1 at half-time was less than we deserved.

“The second half was complicated by the quality of our opponent. It was a game of great intensity. We created good chances, but so did La Real.

“You can’t control a game for 90 minutes. When you have to defend, you defend. We dealt with it impressively. By showing this attitude our victory was deserved.”

The result means Barcelona are now fifth in La Liga, six points behind Atletico, La Real and Madrid in the top three.