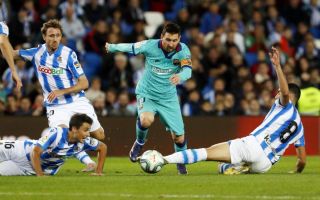 Real Sociedad are flying high so far this season and currently sit at the top of La Liga.

David Silva was a high-profile signing this past summer but two players who are arguably more important to Imanol Alguacil‘s side are Mikel Oyarzabal and Mikel Merino, both local players under the age of 25.

Neither of the latter were alive the last time La Real won at Camp Nou in the 1990/91 season as reported by Mundo Deportivo.

Real Sociedad faced Johan Cruyff‘s legendary Dream Team that evening but managed to come away with a 3-1 win.

Since then, La Real have drawn once and suffered 27 defeats in Catalonia, a statistic that undoubtedly will be on their minds despite their lightning start to the campaign.

Coincidentally, current Blaugrana coach Ronald Koeman was in the starting XI that lost to the Basques all those years ago. He’ll be hoping they don’t repeat the trick.