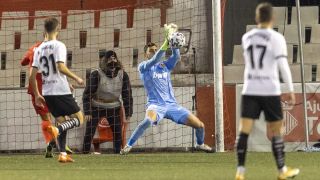 Valencia – the side who remain the current holders of the Copa del Rey from their 2019 triumph – avoided a shock loss to Tercera side Terrassa thanks to a last-minute equaliser from Yunus Musah proceeding an extra-time win.

Los Che fielded an experimental side but not one that was lacking in first-team experienced. They were skippered by Russian international Denis Cheryshev, with forwards Manu Vallejo and Ruben Sobrino both in the line-up and Eliaquim Mangala in the heart of defence.

The hosts took a shock lead in the ninth minute and Alex Fernandez doubled their lead five minutes after half-time from a direct free-kick.

20-year-old midfielder Guillem Molina – one of a number of youngsters making their senior debut for the club – was then sent-off for a second bookable offence three minutes later to compound the misery for Javi Gracia’s side.

Valencia then made a host of substitutions, with stars such as Goncalo Guedes and Carlos Soler introduced, and it was the latter who pulled a goal back with five minutes from time to give the visitors hope from the penalty spot before Emilio Lucas was then dismissed for the hosts to level the numbers on the pitch up.

US international Musah then grabbed a dramatic last-minute equaliser before Guedes netted twice in extra-time to seal a dramatic win and allow Valencia to breathe a sigh of relief.