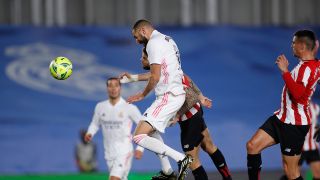 Watch: Karim Benzema gets his second and Real Madrid’s third against Athletic Club

Dani Carvajal collected a short corner to drop a deep ball into the box, setting it up invitingly for Karim Benzema to attack and steer his well-directed header into the back of the net.