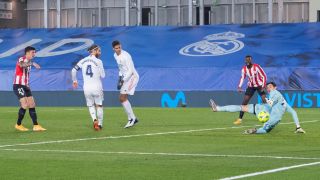 Watch: Ander Capa gets Athletic Club back on level terms at Real Madrid