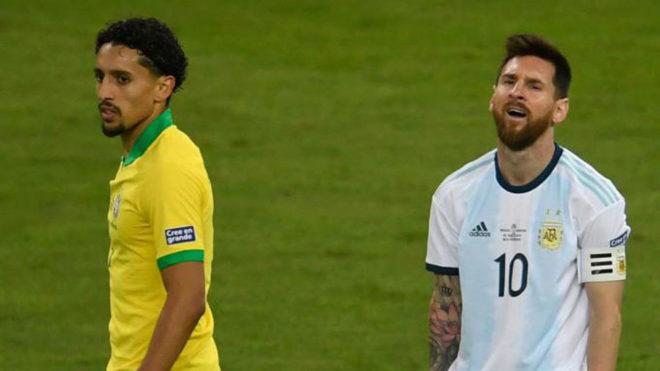 Paris Saint-Germain captain Marquinhos has been speaking both about being drawn against Barcelona in the Champions League as well as the future of Lionel Messi.

Marquinhos has played against Messi both with PSG and with his country, Brazil, but maintained he holds the ultimate respect for the Argentine playmaker.

Messi has been heavily linked with PSG ever since he tried to leave Barcelona this past summer.

The French champions and Manchester City are said to be at the front of the queue to sign the Argentine when his contract expires this coming summer.

“At the moment we are rivals with both our national teams and our clubs. He’s a great player. We all know what he’s capable of and we’ll see what happens.”

Marquinhos and PSG were knocked out of the Champions League by Barcelona in both 2015 and 2017, and the Brazilian defender was full of praise for the Catalans.

“It’s a great game to play, a great challenge,” he said. “They’re a great adversary.

“We expect a great battle and we will have to be prepared for this confrontation. We saw the draw and there weren’t many opponents left to face. We were ready for anyone.”

Marquinhos said that having compatriot Neymar Junior play for PSG rather than Barcelona is a great asset compared to their last meeting in 2017, in which Neymar was pivotal in helping Barcelona to victory.

“The team has changed a lot,” he said. “We are more mature and the context will be different.

“Neymar hurt us the last time, but he’s he’s with us [this time]. He really wants to play this match and help us win.”

He joined the Catalans in 2013 from Brazilian side Santos and won two La Liga titles, three Copa del Reys, one Spanish Super Cup, one Club World Cup and one Champions League at Camp Nou before joining PSG in a record €200m deal in 2017.