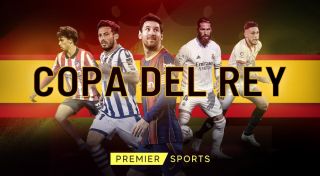 The Copa del Rey has returned to live TV across the UK and Ireland with Premier Sports confirming they will broadcast matches from Spain’s premier cup competition.

The company have penned a two-year deal to show the tournament, run by the Spanish FA, with the first game to be broadcast between regional side CD Marchamalo against La Liga outfit Huesca in the First Round.

With 116 teams in the competition, the match between fourth tier Anaitasuna and top-flight Getafe will be broadcast on Thursday.

📺 We’re bringing you live and exclusive coverage of the Copa del Rey over the next two seasons, starting tonight with CD Marchamalo vs Huesca at 6pm on FreeSports!

Last season’s Copa del Rey final between Athletic Bilbao and Real Sociedad is due to be played on 4 April, and will also form part of this deal.

The Spanish FA are obliged to stage the game a week or more before the showpiece of the 2020/21 edition of the competition – with the European place from last season’s competition having been deferred to seventh place in La Liga standings.

This will be the first Basque derby in the Copa showpiece, and the clubs have opted not to play the game until fans can safely attend football.

Those two clubs will both join the Copa after their participation in this season’s Supercopa de España, alongside Barcelona and Real Madrid.