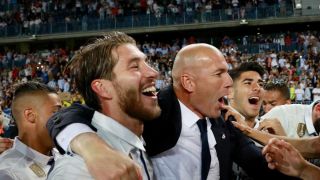 Zinedine Zidane and Real Madrid have hit a lick in recent times, performing well over the last week to win three crucial games.

A key part of their success, according to Mundo Deportivo, is their ability to recently settle upon a settled starting XI.

Included in this cohort would undoubtedly have been captain Sergio Ramos if not for injury ruling him out of last weekend’s clash in Seville.

Ramos’ return is a game-changer for Los Blancos, his presence automatically lifting the entire squad. His performances, alongside that of other Madrid veterans Kroos, Modric and Benzema, make a pivotal difference in their fortunes.

87 – Toni Kroos 🇩🇪 has completed 87 of his 90 passes (96.7%), the most by a player in a LaLiga derby between Real Madrid and Atlético de Madrid since at least 2005/06. Metronome.#RealMadridAtleti #ElDerbi pic.twitter.com/VaZ3fOTzgC