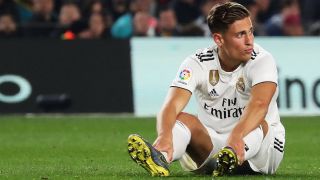 Real Madrid look very carefully at a player’s ability to score goals when selling a player, especially when selling him to a direct rival.

There’s nothing those in power at the Santiago Bernabeu hate more, according to Marca, than the idea of a player they sell scoring against them.

When selling Marcos Llorente to Atletico Madrid, they wouldn’t have thought that would ever be a problem.

Llorente was until very recently exclusively a defensive midfielder but has been transformed into one of the most dangerous attacking players in Spain and indeed Europe.

Llorente has scored five goals so far this season, four of which came in La Liga.

Since last February, the moment he shifted to a more attacking position, he’s scored ten goals a rate of a goal every 207 minutes as well as eight assists.

This is the form he brings to Alfredo Di Stefano on Saturday evening for the Madrid derby. Llorente knows the ground well, having played under Zinedine Zidane for Castilla there.

Llorente never could quite force his way into the starting lineup in the Madrid first team, however, despite shining on loan at Alaves.

His best spell with the club came under the stewardship of Santiago Solari, but he picked up two muscle problems at a crucial period of his reign and by the time he returned to full fitness Solari was out and Zidane had returned.

During Zidane’s first summer back in charge, he summoned Llorente to his office and sent him on his way. A year-and-a-half later, he’s playing the best football of his career for the team leading La Liga.

Llorente can go deep, attack space, assist and score. He’s one of the fittest players in La Liga and has proven to be as tactically intelligent as he is hardworking.

It’ll be interesting to see if he can come back to haunt Zidane and Madrid in one of the biggest derbies in Spanish football.