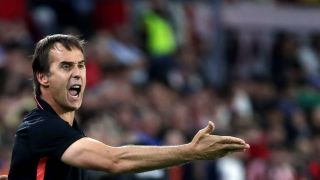 Julen Lopetegui pleased Sevilla got the result they deserved at Getafe

Sevilla have developed a habit of scoring late goals and delivering when it matters this season, and Saturday afternoon at the Coliseum was no exception.

The Andalusians travelled to Getafe in what it always a difficult fixture but even more so in mid-December.

Lining up at full-strength save for Jesus Navas, they saw a remarkable 76% possession but failed to register a single shot on target.

Their saving grace came in the 81st minute when Xabier Etxeita scored the own goal that ended up proving decisive in the 1-0 victory.

Seven of Sevilla last 13 goals in La Liga have come after the 80th minute.

“We deserved to win, I have no doubt,” Sevilla coach Julen Lopetegui said after the game in comments carried by Mundo Deportivo.

“In football, those who deserve it the most do not always win. They have waited for us to make mistakes and transition with fast players.

“We have been patient, we made few mistakes and we created chances to win. The team deserved three points.”

Lopetegui dismissed suggestions that Sevilla should have won more comfortably against Getafe.

“There is very little difference from one team to another,” he said.

“Getafe played a big role in the Europa League last year and has always been in and around the European positions. They’re a very complicated team.”