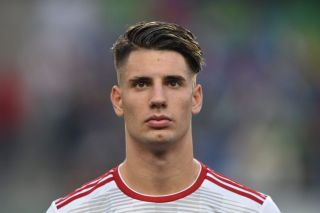 Real Madrid target Dominik Szoboszlai appears on the verge of joining RB Leipzig from RB Salzburg according to Sky Sport News and carried by Diario AS.

Szoboszlai was of keen interest to the Spanish champions but has instead opted to join a club that has had very close dealings with the Austrians in recent years, with Keita, Sabitzer and Upamecano all making the same move.

The only thing missing from the deal is the player’s assent, although that’s expected to be a given. Leipzig will play a figure close to €25m for his services, an amount that matches the reported termination clause.

Szoboszlai will join Spanish footballers Angelino and Dani Olmo in Germany, and is guaranteed to be developed well in the manner Leipzig have proven to specialise in. The club are currently third in the Bundesliga and have made it to the last 16 of the Champions League.

You’d expect, however, that Madrid will continue to keep a close eye on the Hungarian in the coming months and years.