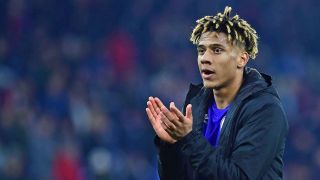 Jean-Clair Todibo has gone from being one of the most promising centre-backs in the European game to a player that isn’t wanted by either his parent club or the club at which he’s on loan.

Benfica want to return Todibo to Barcelona this winter market according to Mundo Deportivo, while the Catalan club insists that their contract with the Portuguese club is valid until June 30th.

Todibo joined Barcelona in January 2019 from Toulouse, with the Blaugrana winning his signature ahead of several other top European clubs.

He failed to convince Ernesto Valverde, however, and was sent on loan to Schalke 04 where he played just eight games.

He returned to Barcelona in the past summer and despite interest form the England, Germany and France, Todibo ended up at Benfica on loan.

Despite losing Ruben Dias to Manchester City, the Portuguese club  don’t see him as being up to scratch either technically or physically to play an important role in their first team and he hasn’t made an appearance.

Featured image courtesy of the Bundesliga.