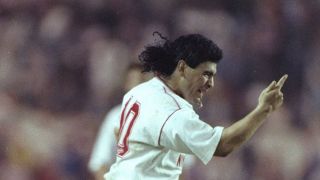 Juan Carlos Unzue, the former Sevilla player who was diagnosed with ALS just a few months, has opened up on his relationship with the recently deceased Diego Armando Maradona.

The pair spent a season together at the Ramon Sanchez Pizjuan in the early 1990s. Maradona joined the Andalusian club at the beginning of the 1992/93 season after recovering from the drug ban he was slapped with while playing for Napoli.

He failed to hit the heights he was capable of at Sevilla, but is remembered fondly by both his teammates and the supporters.

“[Maradona] lost 8kg in a week to play against Madrid,” Unzue told Diario AS. “He went that week to the Sierra Nevada to spend the holidays with his family and when we saw him next, seven days later, you know how much weight he had lost? Eight kilos! He said that the only thing he ate for those seven days was a type of raw meat.”

Maradona’s spell with Sevilla would prove to be his last in Europe. After leaving he returned to Argentina for short spells with Newell’s Old Boys and his beloved Boca Juniors.

Unzue spent the majority of his career with Sevilla, making over 300 appearances for the Andalusian club. Born in Pamplona, he also played for Osasuna, Barcelona, Tenerife and Oviedo.