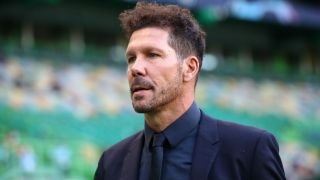 The Argentine was diplomatic in responding to Real Madrid coach Zinedine Zidane‘s comments earlier in the day indicating that Atletico Madrid had now become favourites for the league title.

“I don’t usually comment on the opinion of colleagues,” Simeone said. “Each one has their own opinion and I respect all opinions, whether positive or negative.

“[The Madrid derby] is a beautiful game with fantastic players on both teams. Madrid have been competing for many years with players who remain, despite their age, competitive with younger players, and that’s it be admired. They’re a historical rival for us, and we’re going to hurt them where we think we can.”

Simeone revealed that Hector Herrera is back from injury and fit to play while Luis Suarez is close to returning to peak form after a spell out of action with Covid-19.

The coach also spoke of Madrid’s tendency to turn up and win the really big games. Los Blancos were under serious pressure this time last week only to pull off victories over Sevilla and Borussia Monchengladbach.

“We prepare [thoroughly] for each game,” Simeone said. “We don’t change our opinion of a rival based on different situations they find themselves in. Tomorrow we play. We think about things game by game.”

Atletico are on a good run themselves and find themselves top of the league table, a point clear of second-placed Real Sociedad with two games in hand. Los Rojiblancos have won five on the bounce and haven’t lost a single game so far in La Liga.

In Europe, they secured passage to the last 16 of the Champions League on Wednesday night courtesy of a 2-0 victory over RB Salzburg in Austria.

Madrid won 2-0 on the same night against Borussia Monchengladbach, although Los Blancos topped their group while Atletico finished second behind Bayern Munich.