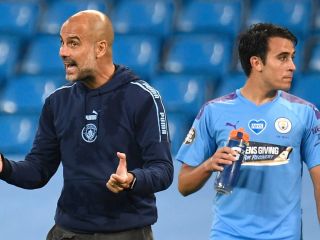 Barcelona have identified centre-back and forward as the two positions they intend on prioritising this January transfer window according to Diario Sport.

The centre of defence was something they had already been quietly working on, but recent weeks as seen their interest in Manchester City centre-back Eric Garcia solidify.

Garcia, who started his career with Barcelona before joining City in 2017, has been speaking with the Catalan club since earlier this year and has clearly communicated his desire to return.

A deal was close to happening in this past summer transfer window only for City to demand too high a fee and cause the talks to break down, upsetting the player.

In the intervening months City have done their best to convince Garcia to stay, with the matter becoming an urgent one given that his contract expires this coming summer.

His determination was steadfast, however, as he believes that now is the perfect moment for him to establish himself in the Barcelona first team.

City are now said to be resigned to losing him, and would be amenable to a more realistic offer in January to avoid losing him on a free in the summer.

Barcelona are already said to have an agreement with Garcia so the only water to bridge is the transfer fee with City. They’re trying to meet them halfway and are said to have been making good progress in these past few weeks.

Barcelona plan on paying for the transfer from the coming financial year, something City are apparently willing to accept. The English club are also expected to retain a percentage of any future sale involving Garcia.

Featured image courtesy of The Guardian.