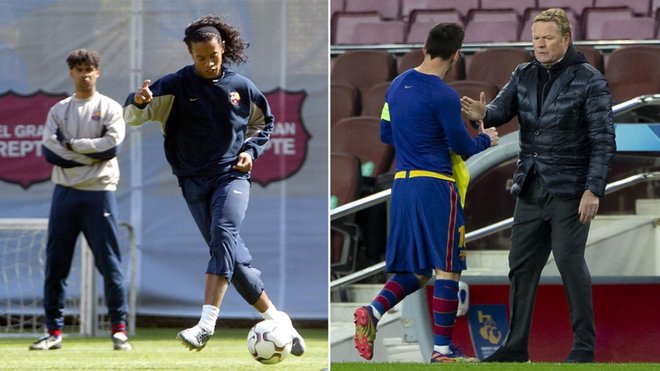 Ronald Koeman is riding a storm at Barcelona right now. Tuesday evening’s defeat by Juventus has increased the noise around his position, with many beginning to question the Dutch coach’s capacity to lead the club.

It’s a situation similar to that experienced by his compatriot Frank Rijkaard back in 2003, a comparison made by Diario Sport. Koeman will be hoping to navigate the challenge as well as Rijkaard.

Pep Guardiola, Luis Enrique, Tito Vilanova, Tata Martino and Ernesto Valverde all enjoyed relatively calm beginnings to their lives as Barcelona coaches. Koeman hasn’t, joining a club that, in the words of the aforementioned report, “has gone from being considered a fort to becoming a powder keg”.

The club is in economic, sporting and institutional crisis. Lionel Messi has one foot out the door and the squad are unable to adapt to the new system, a combination that has resulted in mediocre performance in La Liga and the Champions League.

Rijkaard had a similarly tumultuous beginning to life at Camp Nou, with his job saved by a Patrick Kluivert goal against Sevilla at the Sanchez-Pizjuan in his first January, a moment that marked the beginning of a recovery.

Two integral additions to his squad were Ronaldinho Gaucho and Edgar Davids, a pair that added guile and steel in equal measure as well as both verticality and aggression to the midfield. Barcelona finished second that season behind Valencia.

Of key importance to their success was Rijkaard’s ability to rectify his initial approach and convince the squad of his methods, fostering a shared idea of how the game should be played.

Samuel Eto’o and Deco were brought in the following year, sparking a run of two La Liga titles and the second Champions League of the club’s history against Arsenal in Paris in 2006.

The recipe for Koeman to apply, should he be so inclined, would be to adapt his approach, build a shared vision of the game with his squad, and move decisively and intelligently in the transfer market.