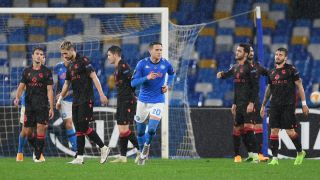 Real Sociedad are through to the last 32 of the Europa League after late drama saw them rescue a draw at Napoli.

The Basque side needed to equal or better the result of Dutch side AZ Alkmaar, who travelled to Croatia to take on Rijeka – who had already been eliminated from the group.

Napoli had already sealed their qualification before kick-off but the situation looked dire for La Real after Piotr Zielinski gave the Serie A side the lead ten minutes before the break.

AZ were somewhat surprisingly only drawing at Rijeka but they were reduced to ten men with ten minutes remaining after Jesper Karlsson was dismissed, setting up a tense finish.

Going into the last minute, Real Sociedad were going out of the competition but striker Willian Jose levelled the score in Naples in the final minute, before Rijeka then took a late lead at home to AZ.

The results mean La Real join Napoli in their progression to the knockout stages.