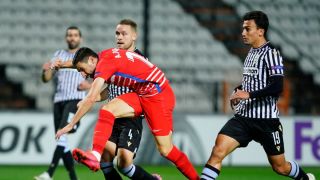 Granada missed out on topping their Europa League group after being held to a scoreless draw by PAOK Salonika in Greece.

Diego Martinez’s side had already assured themselves of qualification to the Round of 32 having amassed 10 points from their opening five group games, meaning that they could not be caught in the final matchday.

However, the Andalusian club would have held hopes of progressing through in first spot in the group – meaning that they would have certainly avoided teams dropping down into the competition from the Champions League and had a higher opportunity of facing other sides who finished second in their respective groups.

Despite this, it remains a historic campaign for the club – who are participating in European competition for the first time in their history and who will now look ahead to the competition resuming in February.

The club are also enjoying a steady start domestically, having amassed 15 points from their opening 11 La Liga games and sitting seventh in the standings.