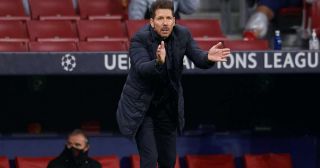 Diego Simeone appreciating last 16 qualification: “For many it’s normal but not for me”

They didn’t. A first half strike from Mario Hermoso was complemented by a late goal from Yannick Carrasco to ensure that Atletico secured safe passage to the next round of the competition in style.

Cholo Simeone’s side are currently top of La Liga, a point clear of second-placed Real Sociedad with two games in hand having won eight and drawn two of their first ten games. They’re considered by many to be the early title favourites.

For Simeone, however, their success is nothing to take for granted. The Argentine places great value in consistency as well as performance, and was clear in his pride in the capacity of his teams throughout the years to do the job almost every season.

“I think that in the nine years we have been here we have qualified for the last 16 eight times,” Simeone said in comments carried by Marca.

“I look back and enjoy with joy, because for many it’s normal but not for me. It’s important to be in the last sixteen for the eighth year, among the best.”

In keeping with his and Atletico’s attention to detail, Salzburg were taken very seriously. The Austrians have a strong young squad with several players capable of hitting the next echelon in the coming seasons, and were a tricky proposition.

“At no time did we think it was going to be simple,” Simeone said.

“We already saw them play against Liverpool last season, and we found a team with high intensity. In passages of the first half their start was important to the game as we found it difficult to break their rhythm, as they were a team that tried to win.

“We tried to hurt them by finding space, and our first goal eventually came from a set piece. In the second half we played with a higher pace.

“Atletico’s style, of being able to change positionally, has been based ever since we arrived on a solid team and that’s how we work. Seeing how everyone who came in from the bench perform as they did makes us happy.”

Next up for Atletico is a trip to city rivals Real Madrid on Saturday evening. Los Blancos are in somewhat resurgent form, having beaten Sevilla in Andalusia at the weekend and just qualified for the last 16 themselves by way of a comfortable 2-0 victory of Borussia Monchengladbach.