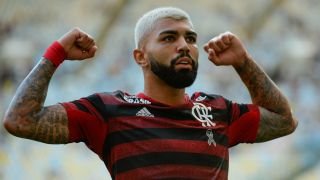 Santos will have to pay €2.9m to Barcelona over their transfer of Brazilian striker Gabriel Barbosa – commonly known as Gabigol – to Inter Milan in 2016 according to Cadena Ser and carried by Diario Sport.

Barcelona had an agreement with Santos about Barbosa, with the idea being that if another club came in for him with an offer Barcelona would be informed and they could decide whether to match it and sign the footballer or let him go.

It was part of the deal that brought Neymar Junior to Barcelona from Santos in the summer of 2013.

The now-Flamengo striker joined Inter in August 2016 for a fee in the region of €25m, and was sought after at the time by many other European clubs including Juventus and Chelsea.

Barcelona denounced the breach of contract and now CAS has ruled in their favour, announcing that Santos have to pay the Catalan club €2.9m in compensation. Barbosa has never fulfilled his potential in Europe but is now thriving back home in Brazil.