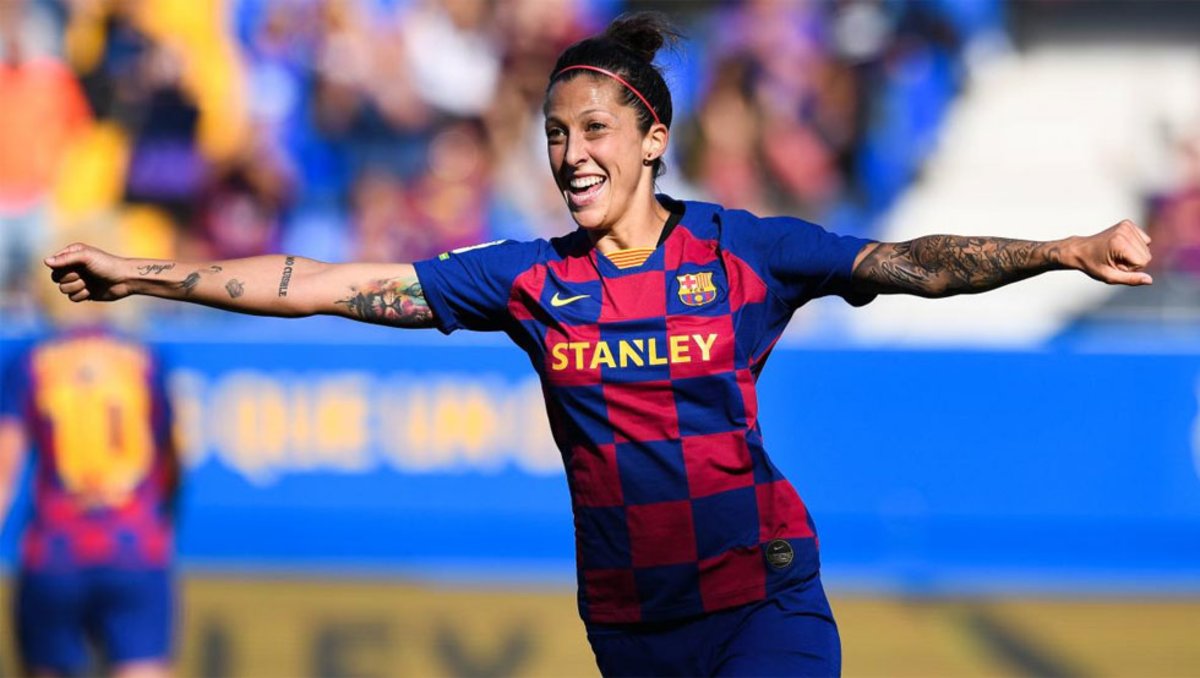 It has been an unusually quiet start to the season for last season’s Pichichi, Barcelona’s Jenni Hermoso. The 30-year-old Spanish international was sidelined by injury for several of her club’s early matches this season and had not exactly hit her best form since returning.

However, all that changed with Saturday’s lunchtime game against Santa Teresa, which saw Barça win 9-0 and Hermoso write her name into the history books as the club’s record scorer.

It only took three minutes for the breakthrough, Hermoso tapping in from Aitana Bonmati’s cutback. Then after a 15-minute hat-trick from Lieke Martens, Hermoso took over.

Another tap-in saw her equal the record, previously held by Sonia Bermúdez and then she claimed the record outright with the goal of the game, a curling left-footed effort from just inside the penalty box before taking her personal tally to four for the day and 125 overall with another close-range finish.

This came only a few days after a hat-trick for Spain had seen her move to within two of Veronica Boquete’s record total of 38 goals for the national team. Her achievements last season have also seen her nominated for FIFA’s ‘The Best’ award, only one of two Spain-based players on the shortlist – the other being her teammate Caroline Graham Hansen.

Depor finally get off the mark

After a couple of heavy defeats against Levante and Atlético Madrid, the international break gave manager Manu Sánchez a chance to regroup and refocus on breaking their duck against Eibar, who after a bright start to their own season have slipped down the table over the last few weeks.

Depor got off to the best possible start, two of their star attackers combining to produce a goal with Athenea del Castillo cutting the ball back for Peke to finish – only her second goal of the campaign after netting 14 last time out.

It must have seemed like the same old story for the Galicians when Eibar hit back, scoring twice inside 10 minutes to go in leading at half time.

But Depor did not let their heads drop and were level again within ten minutes of the restart, Gaby García nodding in from close range after the Eibar goalkeeper had spilled a cross. Then they hit the front again thanks to the Athenea and Peke combination – this time a cross to the back post and a composed first-time finish.

Athenea, who in October became the first Deportivo player to earn a cap for the Spanish national team, was again involved on 70 minutes, when she drew the foul which allowed Alba Merino to score the game-clinching fourth from the penalty spot.

Although not enough to move them off the bottom, this one victory could yet make a huge difference to Depor’s season. Next up is a home game against fellow strugglers EDF Logroño which already looks like the proverbial relegation six-pointer.

Of course, many fans of Spanish football will also have a keen interest in poker sites. Last year, Barcelona stars Gerard Pique and Arturo Vidal – who has since joined Inter – won a whopping €500k from the Single-Day High Roller poker tournament, with plenty of crossover between the interests due to potential winnings.

Levante have gone somewhat overlooked so far this season. Last season’s third-place finishers endured a bit of an overhaul during the summer and perhaps as a result of that, took a while to get going, with a win, draw and defeat from their opening three games.

Then they ended up having three consecutive games suspended due to the Covid-19 protocol which has left them playing catch-up on their rivals for the European places. But they’ve made a good job of catching up so far, rattling off four consecutive victories against Athletic, Depor, Santa Teresa and on Saturday, Rayo Vallecano felt the full force of their good form in a 5-1 victory. Star of the show was Esther González, who scored a brace, her first goals since the middle of October, and set up two more.

Next up for them is their rearranged fixture with Real Madrid, a side in similarly good form to them, having won three on the bounce, and this could be a key fixture in terms of the Champions League places come the end of the season.

Tenerife back on top as Betis sink

Atlético Madrid led the way going into the weekend, but their concession of a last-minute equaliser at Athletic Club opened the way for Barcelona to claim top spot. But only for 24 hours as UDG Tenerife won again to take over the leadership.

Ange Koko opened the scoring after dribbling through a static Betis defence on 32 minutes and Patri Gavira doubled the lead on 51 minutes by scoring direct from a free kick out on the right flank. Allegra Poljak added a third before a late consolation for the visitors.

To underline how good the islanders start to the season has been, after ten games they are only one point short of their total after 21 last time out. Make no mistake, they are serious contenders for the European places.

Betis meanwhile, are in something of a rut, one win in their last five leaves them in 14th, just four points off the bottom. All four teams below them have games in hand too, so unless they can start picking up more points soon, they could well find themselves dragged down into the relegation zone.