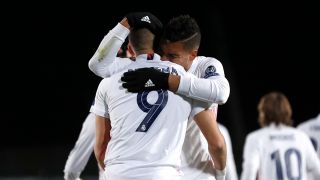 They did it. A brace from Karim Benzema capped an incredibly comfortable performance from the hosts, who were in control from the first minute to secure their place in the next round.

Zidane and all Madridistas went into the game hoping for more of the same, and they got it from the jump.

Los Blancos took the lead inside the first ten minutes, when Benzema steered a glancing header into the back of the net after a floated ball from Lucas Vazquez.

Benzema doubled his and Madrid’s advantage in the 32nd minute. This time it was Rodrygo who delivered a whipped ball across the face of goal from the right side for the Frenchman to steer home with a free header.

Madrid almost made it three in the minutes before half-time. Luka Modric, their 35 year-old midfield conductor, scored a neat half-volley only for it to be ruled out for an offside in the buildup.

The Spanish champions, however, had done enough.