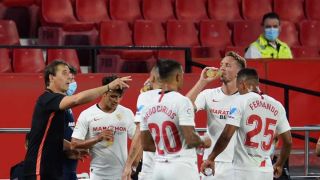 The Andalusians had already qualified for the last 16 and are unable to finish first, so had their sights focused on returning to winning ways after successive home defeats to Chelsea and Real Madrid in the last week.

Coach Julen Lopetegui made several changes for the clash, starting with no recognised full-backs due to the decision to rest Jesus Navas as well as injuries to Marcos Acuna and Sergio Escudero.

Nemanja Gudelj is expected to sit as the pivot with Oliver Torres and Ivan Rakitic partnering him in midfield, with Youssef En-Nesyri leading the line flanked by Suso and Oussama Idrissi.

Sevilla beat Rennes 1-0 in the return fixture at the Ramon Sanchez Pizjuan back at the end of October, with Luuk de Jong scoring the sole goal. The French side are bottom of Champions League Group E with just a point to their name.

The lineups are also out for Rennes v Sevilla, with visiting coach Julen Lopetegui making several changes from the side that lost to Real Madrid at the weekend. pic.twitter.com/QPdrunZYkE