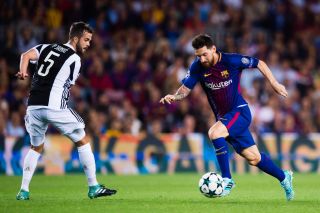 Miralem Pjanic has compared Lionel Messi with Cristiano Ronaldo, two players widely considered amongst the greatest to have ever played the game.

Pjanic played with Ronaldo at Juventus while he currently plays with Messi at Barcelona, who he joined from the Italians this past summer. The Bosnian midfielder was speaking ahead of Tuesday evening’s Champions League clash between the two.

“With the passing of time we’ll be able to fully appreciate what these players have achieved in these past 20 years,” Pjanic told Julio Maldonado in comments carried by Diario Sport.

“They are incredible. As a player and a person, [Cristiano] is spectacular. He’s a true athlete who takes care of all the details. [Messi] is an alien. He’s an absolute phenomenon, capable of doing anything with the ball.”

Pjanic has struggled to impose himself on Barcelona since he arrived in Catalonia. The Bosnian has failed to break into the double pivot preferred by Ronald Koeman, who has relied on Sergio Busquets and Frenkie de Jong in that line of two in his favoured 4-2-3-1.

Now that his settling in period has passed, he’ll be hoping to find more minutes and break into the Blaugrana starting line-up.

Juventus will need to beat Barcelona by more than two goals this evening to secure first place and a preferable draw in the last 16 of the Champions League. The Catalans won 2-0 in Turin in October.

Barcelona have won all their games so far this Champions League campaign, although their domestic form has been patchy. They lost 2-1 to newly-promoted Cadiz at the weekend.