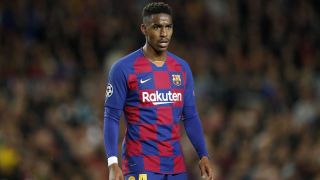 Barcelona have made four of five players available in the January transfer market with the ambition of reducing the club’s wage bill, and included in this cohort is Firpo.

The Blaugrana have been fielding offers for the defender already, with Inter said to be the most realistic option. The Italians are looking to sign Firpo on an initial loan with an option to buy.

The transfer nearly happened this past summer, but as it was tied up with the possibility of Lautaro Martinez going the other way it never happened.

Firpo hasn’t seem game-time under Ernesto Valverde, Quique Setien or Ronald Koeman, with the latter preferring to play Sergino Dest, a right-back, at left-back ahead of the Spaniard.

Firpo was said to be reluctant to leave during the summer but is now open to a move. As well as Inter, Atalanta and Napoli are also interested, although the likelihood of either usurping Inter in the race for his signature is remote.

Should Barcelona prove successful in the sale, they’re not thought to be in the market for a replacement. The sentiment in Catalonia is that Alejandro Balde, of the B team, is close to a promotion to the first-team setup.