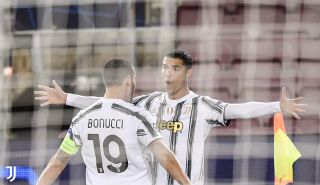 “It was Mission Almost Impossible,” joked Ronaldo when talking to Movistar in comments carried by Football Italia.

“The key was to start strong, as within 20 minutes we were already 2-0 up, so from that point on we really believed that we could do it.

“This victory is going to be such a confidence-booster, we needed a win like this against a big team.”

Barcelona were unhappy with the first penalty, awarded when Ronald Araujo got into a tangle with Ronaldo.

“I couldn’t say, as I didn’t see it on television,” he said. “Sometimes soft penalties are called, but I don’t want to get into that, because the referee’s job is always tough.

“When you score three goals at Camp Nou, there can be no doubt you deserve to go through as the group winners.”

This was the first time Ronaldo faced off against Messi since he moved to Juventus, as he was out with COVID-19 during the Turin clash.

“We’ve been in the awards ceremonies for 12-13 years now and I never saw him as a rival, that’s all stirred up in the media,” Ronaldo said. “We always got along perfectly well and if you ask Leo, he’ll tell you the same thing.”