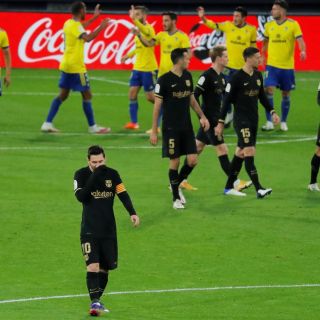 Barcelona off to their worst league start in 33 years

Barcelona‘s 2-1 defeat to Cadiz on Saturday evening means that 2020/21 is their worst start to a league season since 1987/88 according to Diario Sport.

Ronald Koeman‘s team are seventh ten games in with just 14 points to their name and league leaders Atletico Madrid 12 points into the distance.

Real Sociedad are ten points ahead of Barcelona and Real Madrid are six clear, although both have played a game more. A Champions League spot is six points away.

Only two points were awarded for a victory back in 1987/88, so the points tally is deceptive, but if we use the three point rule that Barcelona team would have had 13 points from their first ten games.

This century, the only two season openings that compare are the 16 points earned in 2000/01 with Llorenc Serra Ferrer on the bench and the 15 in 2002/03 with Louis Van Gaal.

Van Gaal was sacked that January despite passing through the group stage of the Champions League winning 16 points out of a possible 18, a potential warning to Koeman.

The Catalans will also have to react domestically, facing Levante, La Real and Valencia in their next three games. Should they fail to get back on track in La Liga quickly, the narrative around Koeman’s supposed revolution will take a turn.

Featured image courtesy of The Guardian.