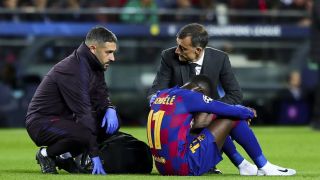 A history of Ousmane Dembele’s injuries at Barcelona

Barcelona have revealed in a statement that winger Ousmane Dembele has suffered from an elongation in the hamstring of his right thigh and will miss an as-of-yet unspecified period of time.

The wide man’s spell at the club he joined in 2017 has been marked by injury, and he’s been unable to deliver on a consistent basis the form that earned him the move.