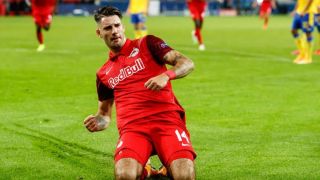 Real Madrid are said to have stepped up their pursuit of Hungarian star Dominik Szoboszlai according to Bild and carried by Diario AS.

Zinedine Zidane is said to have reached out to the footballer and held a telephone conversation with him in a bid to convince him to sign for Madrid. Szoboszlai is said to be intent on leaving RB Salzburg during the coming winter window.

The 20 year-old is apparently interested in moving to the Santiago Bernabeu but is in the midst of advanced negotiations with German club RB Leipzig.

Many players have transferred between Salzburg and Leipzig, including Naby Keita, Marcel Sabitzer and Dayot Upamecano.

Both clubs are owned by the energy drinks company Red Bull, and Leipzig is renowned as a club with the ability to develop young talent and take them to the next level.

Szoboszlai has scored 17 goals in 17 games so far this season with Salzburg, and is said to be keeping his powder dry regarding a decision about his future.

The call from Zidane is said to have meant a lot to him, with the French coach seeing him as the successor to Isco in that central creative playmaking role in the Madrid midfield. Liverpool and Arsenal are also circling.