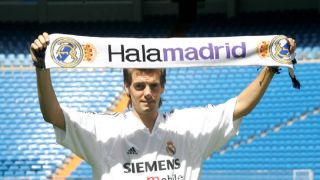 Former Real Madrid defender Jonathan Woodgate has lifted the lid on the inner workings of the Santiago Bernabeu dressing during his time at the club.

The ex England international joined Los Blancos in a £15m deal from Bobby Robson’s Newcastle United in 2004, but his time in the Spanish capital was marred by injuries and a dramatic drop in form.

His fitness issues prevented him from making a single appearance in his first season at the club, before scoring an own goal and being sent off on his eventual debut in September 2005.

After returning to England in 2006 he played for Middlesbrough, Tottenham and Stoke City, before retiring in 2016, but he earmarked his time in Spain as one of the most important in his long career.

“I had more than one coach at Madrid, with Camacho, Luxembourgo etc, and the language was complicated but I learned a lot,” he told an interview with Jamie Carragher’s Greatest Game podcast, reported via Marca.

“At first, it was a bit of a nightmare, with the language and the injuries. But I played with some extraordinary players.

“Roberto Carlos, Ronaldo were great. The Brazilians helped me a lot. When you go to such a big club, you can’t even lose in training.

“Losing a game was like losing the World War.”

In total Woodgate made nine La Liga appearances with Real Madrid before returning to the Premier League, as the club finished in second place in back to back season during his time there.