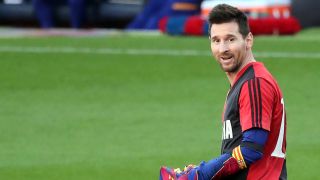 Much of the football world have been united recently in giving tributes to Diego Maradona. Maradona, one of the greatest footballers of all time, passed away last week at the age of 60 at his home in Buenos Aires after suffering a heart attack.

Maradona made a handful of appearances for the Rosario club during the 1993/94 season, while Messi began his career there before leaving for Barcelona aged 13. It’s within this context that Messi’s tribute was birthed.

After scoring Barcelona’s fourth goal in the 4-0 victory over Osasuna on Sunday afternoon he lifted his shirt to reveal that beneath he had a number ten Newell’s shirt from the season Maradona spent there.

Newell’s have now taken advantage of the attention the shirt has gotten by re-releasing it and putting it on sale on their club store according to a report in Diario Sport.

“In 1993, Diego Maradona made the decision to return to Argentine football to wear the shirt of our club,” Newell’s said in a statement. “Since then, images of the star wearing our kit went around the world.

“This week, 27 years later, this phenomenon occurred again at the hands of his heir: Lionel Messi scored a goal for Barcelona in La Liga and paid tribute to the genius of world football by taking off the Catalan club’s shirt and showing the world the red and black that Diego wore during his time at Newell’s in a demonstration of love and respect to the greatest in history.”

Messi’s gesture sparked a flurry of interest in the iconic shirt, prompting their decision to put the replica on sale. Newell’s have organised the sale in both Argentina and internationally.

For Argentines, a regular pack costs 4,500 Argentine pesos, including the shirt, a certificate that the product is original and a “Diego in Newell’s dossier”. A premium pack, which costs 9,700 pesos, adds a special edition box and five photos of Maradona. Foreign buyers are only offered the Premium Pack, which costs about €99 excluding delivery.