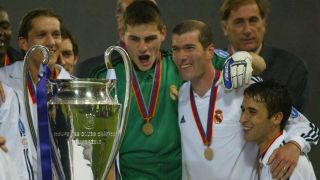 Zidane’s position as head coach at the Santiago Bernabeu has come under pressure in recent times.

Los Blancos are currently fourth-placed in La Liga and outside of the qualification places for the knockout phase of the Champions League going into the final matchday.

Their last result in the former was a 2-1 home defeat by Alaves, while their last European endeavour saw them beaten 2-0 by Shakhtar Donetsk.

“We’re starting to get going,” Casillas said in Diario AS.

“Madrid depends on the Champions League, and La Liga is quite even at the moment. It’s a very different year.

“Zizou is a magnificent coach.

“He’s a good friend and will do everything possibility to lift Madrid as high up as possible. You cannot live in the past but he’s earned the right for us to trust in him.”

The word on the street in the Spanish capital seems to be that the month of December will be of pivotal importance as to whether Zidane retains his position or not.

Los Blancos travel south to take on Sevilla this weekend before a titanic clash with Borussia Monchengladbach, who are leading their Champions League group.

They’ll need to better Shakhtar’s result against Inter Milan given that the Ukrainians have the better head-to-head record and they’re currently level on points.

Aside from five years with Porto, Casillas spent his entire 22-year senior career with Madrid, 16 of which he spent as Spain’s goalkeeper.

Casillas won five La Liga titles, three Champions Leagues and one Primeira Liga, amongst many other titles, at club level.

With Spain, he was an integral part of the side that won two European Championships and the 2010 World Cup.