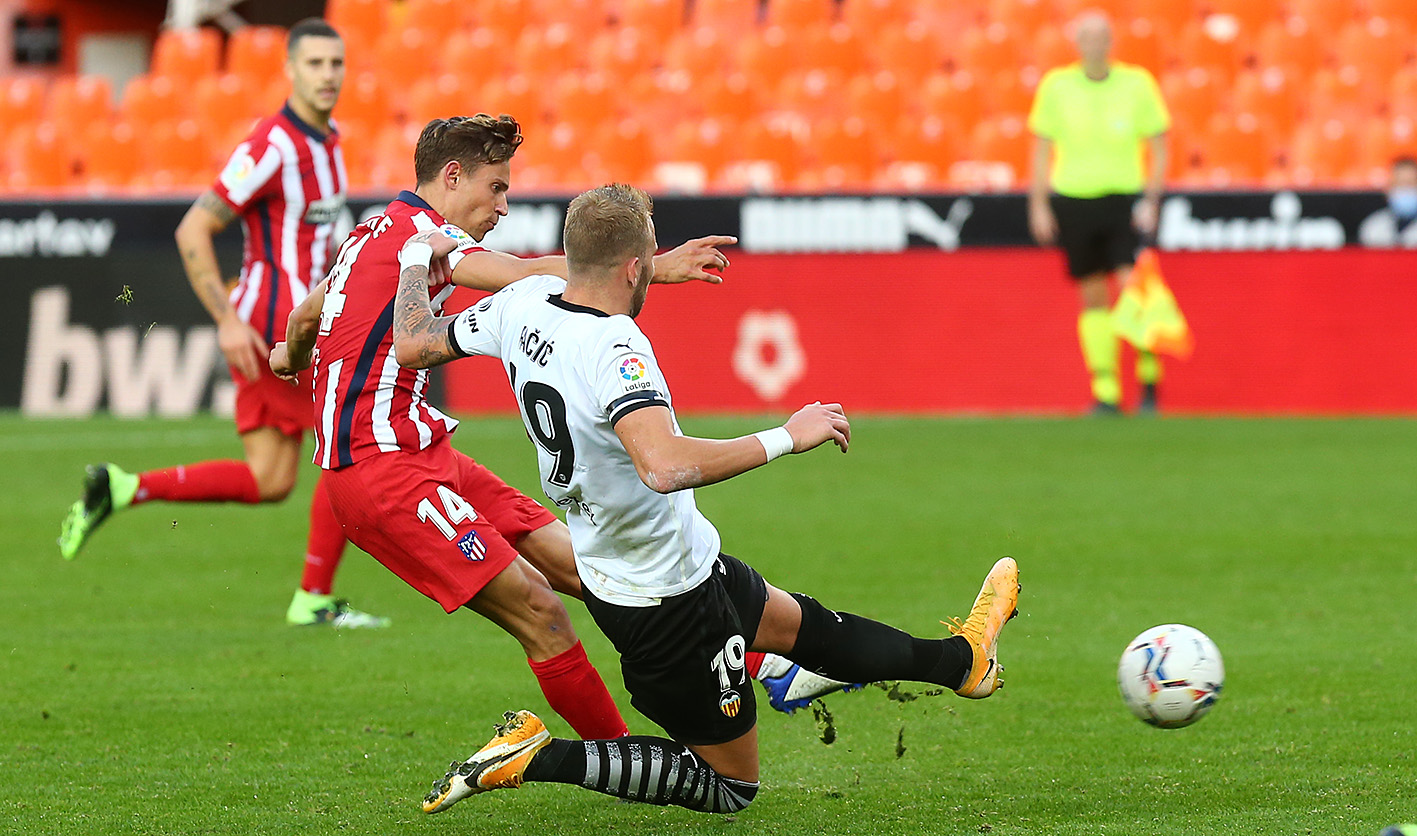 If last week they went back to basics to beat Barcelona, Atletico Madrid truly invoked their 2013/14 selves by grinding out a 1-0 win over Valencia on Saturday. For most of this season, Diego Simeone’s charges haven’t looked like a team in the same mould as their side from seven years ago that picked up the title in La Liga – they’re much more expansive and attacking this year – but the manner of the victory over the unpredictable Los Che was like that seen by so many title-winners in the past.

Valencia have been spiralling in their own problems this season, yet they are still a team that shows admirable determination and togetherness. Boss Javi Gracia’s stock must rise when judging the job he is doing, given the extremely tough circumstances in which he is working. While they have shown themselves capable of being beaten by the smallest teams in the league, they are also able to knock down the champions just a couple of weeks after. Saturday was one of their good days where they formed a more than formidable opponent for the Colchoneros.

Valencia created little to worry Atleti and a 0-0 would have suited them perfectly fine. Fbref shows that the expected goals in the match was 0.1 for Valencia to Atleti’s 0.8. Gracia’s side sat back and looked to soak up pressure, putting the onus on Atleti to come out and play with the ball, all the while missing Luis Suárez and Diego Costa through injury, and with two of their most explosive players – Joao Félix and Yannick Carrasco – starting on the bench.

Chances were difficult to come by for the Madrid side. Captain Daniel Wass was involved up and down the pitch, central defenders Gabriel Paulista and Hugo Guillamón (replaced by Eliaquim Mangala in the 57th minute) stood strong and disciplined, and Uroš Račić battled excellently in the middle. Jaume Domenech was solid in goal too, stretching to parry away two Lemar shots from distance in the first half. Valencia did everything they possibly could to frustrate a better team than them, and another day would have gotten the point that could easily have been deserved.

Yet, Atleti did not give up on asking different questions of Valencia. When one system did not work, Simeone switched things around and changed the shape. Félix and Carrasco came on eventually, as did Kondogbia to face the side he left just a couple of weeks ago, and Atleti’s shape moved to a 3-5-2 during the second half, with Carrasco and Trippier operating as wing backs. The Englishman made seven shot-creating actions in the game, more than any other player, while the Belgian drove at the Valencia defence with purpose and eventually crossed in the ball that led to Toni Lato unwittingly knocking it into his own goal.

Tipping off the inside of the post and just barely bouncing over the line, the goal symbolised just how close Valencia came to getting a result out of the match. From his more defensive left wing-back role, Carrasco now forced this weekend’s winning goal while also scoring last week’s decider against Barcelona after bursting up the length of the pitch at lightning speed. The evolution of his style of play is moving in tandem with Atleti becoming more dynamic and with much more variance in their attack, compared to iterations of their team we have seen in the past.

This Colchoneros team can ask different questions of opposition teams and mix it up within the game if things are not going the way Simeone would like them to. More importantly, this result shows they are capable of winning games that are in danger of slipping away from them, when other teams want to frustrate them by sitting deep; the type of three-point performances that wins titles. Their title charge is likely to dominate La Liga news in the weeks to come.

Spanish football mourned the loss of Diego Armando Maradona this week with minutes of silence and applause ahead of every kickoff in La Liga. While El Diego had mis most glorious spell in Italy and with the Argentina national team, he still had a huge impact on not only Spanish football during his time with Barcelona and Sevilla, but on world football as a whole, becoming a cultural icon as much as a sporting one; an embodiment of free spirit, the victorious underdog, and the ultimate flawed genius.

Diego Simeone’s emotions were clear during his clapping as he remembered his compatriot and teammate during their spells at Sevilla. Messi unveiled a Newell’s Old Boys jersey in celebration of his strike against Osasuna. Messi grew up a Newell’s fan, and Maradona played for the Rosario club in the early 1990s. In fact, the Barça captain’s goal was eerily identical to the only goal Maradona ever scored for Newell’s.

Messi’s goal and jersey celebration was not the only tribute to Maradona’s memory this weekend. As Martin Braithwaite bundled in the first goal of the game, the Argentine followed it over the goalline with his hand outstretched as though he were so tempted to punch it in with his own ‘hand of god’ to ensure it crossed the line. Barça’s number 10 did not have to even touch the ball in the end, as the Dane’s thigh had just about done enough to put Barça ahead.

Mikel Oyarzabal has never missed a penalty as a professional footballer in his life. He has taken 16 spot kicks now after his latest against Villarreal, nullifying Gerard Moreno’s penalty earlier in the encounter, and has converted them all. Real Sociedad and the yellow submarine can both take a lot of encouragement from a well disputed game of football on Sunday night.

Two of the most in-form teams in La Liga, both playing attractive football and sandwiching Atletico Madrid at the very top of the table, would count qualifying for Europe again as a successful season, but the longer the campaign goes on with big names like Barcelona and Sevilla outside of the top four spots, they could consider readjusting their ambitions for the season and view Champions League qualification as a serious target.

Deportivo Alavés are unbeaten in five games after beating Real Madrid away from home 1-2. The last time they saw such a stretch of form was in February-March 2019, when they went six unbeaten against Levante, Real Betis, Celta Vigo, Villarreal, Eibar, and Huesca. This current run features Barcelona, Valencia, and Real Madrid, with their next outing being against table-toppers Real Sociedad.

Meanwhile, the champions are becoming oddly accustomed to giving away penalties and gift goals, as a spot kick and a misplaced pass from Thibaut Courtois to the feet of Joselu just outside the box were how the Basques got their goals. Madrid are now seven points off the top of the table, while Atletico Madrid have a game in hand on them which could extend that gap to nine.

After joining the club last January and failing to make an immediate impact, Youssef En-Nesyri is proving himself to be a worthy striker in this Sevilla team of late. The Moroccan is in a great goalscoring run of form now, with six goals in his last seven appearances for club and country. In fact, he has started only four of those games, putting his goals per minute ratio at a strike every 62 minutes since Halloween. The Andalusians are making a habit of snatching late victories, with dramatic finishes to win all three points in all of their last three outings now.

Celta Vigo’s new manager Eduardo Coudet got his first win as a La Liga manager over the weekend as the Galicians came from behind to defeat a Granada side who now appear to be in freefall. A couple of weeks ago, Iago Aspas spoke about the managerial situation at the club when Óscar García was still in charge and put blame for poor results on the players instead of the coach. Óscar was given a couple of more games following those comments, but Celta changing managers in November is almost becoming an annual event. Coudet is now off the mark thanks to goals from Nolito, Miguel Baeza, and Fran Beltrán.

Goal of the week: Lucas Boyé’s fantastic control and even better strike into the corner of the Cádiz net from distance. Elche had taken the lead against their fellow-promoted opposition before the Andalusians pegged them back to share the points. The commentator on the highlights of the game on the La Liga YouTube channel used the fantastic turn of phrase to describe the shot, saying that the Elche striker put the ball “where the mice sleep.”

Lucas Boyé with a fantastic strike! 🔥

The Argentinian striker used his first touch to create the angle, and then fired Elche in front ⚪🟢 pic.twitter.com/JQTZOkzNnO