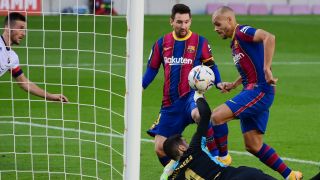 Messi looked tempted to break out the Hand of God! 😂

Braithwaite bundles it over to get Barca the opener 🔵🔴 pic.twitter.com/fuQNucg1Bi