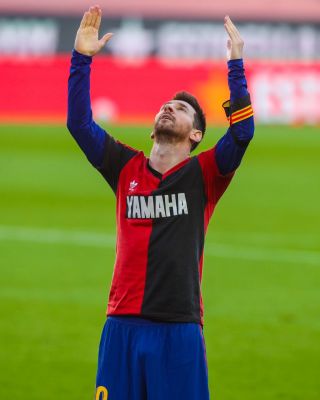 Shortly after, Barcelona doubled their lead through Antoine Griezmann. The ball fell to the Frenchman at the edge of the box after a slick team move broke down, and he made no mistake with his sumptuous volley.

Barcelona made it 3-0 through Coutinho just shy of the hour mark, who made up for his earlier misses with a neat finish after a selfless assist from Antoine Griezmann.

The hosts then saw a goal ruled out by VAR for a marginal offside before, moments after restarting, Messi came up with the goods to make it four with a stunning finish from outside the box.

The Argentine then celebrated with a touching tribute to Maradona. Messi took off his Barcelona shirt to reveal that underneath he had a Newell’s Old Boys shirt with the number ten on the back before gesturing to the heavens.

Messi began his career with Newell’s and Maradona played for them during the final years of his career. It was a truly touching tribute between two of the greatest players to have ever played the game.

Oh my word…MAGIC from Messi! 🔥

And he celebrates by revealing a Maradona Newell's Old Boys jersey under his Barca shirt ❤️ pic.twitter.com/Swreif0daf