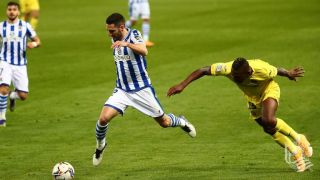 Real Sociedad’s lead at the top of La Liga has been cut to just a single point as Imanol Alguacil’s side were held to a 1-1 draw at home to Villarreal.

The Basque club have lost just once so far this season, at home to Valencia back in September, but they were unable to find a winner at the Anoeta Stadium, as Unai Emery’s visitors claimed a deserved point.

Gerard Moreno continued his excellent start to the season, as he tucked home a sixth minute penalty, after Aritz Elustondo brought down Pervis Estupinan inside the box.

However, Alguacil’s side reacted to that setback before the break, as Mikel Oyarzabal and Ander Barrenetxea were both denied Sergio Asenjo.

But La Real skipper Oyarzabal finally edged them back into the game, as he converted from the spot on 33 minutes, following a Pau Torres elbow on Robin Le Normand.

Alguacil’s table toppers did carry the greater threat after the break, as Asenjo saved from Willian Jose, but in the end his team had to settle for a draw.