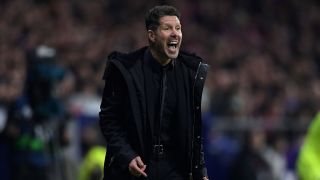 Saturday was a good day for Diego Simeone.

His Atletico Madrid team went level on points with Real Sociedad at the top of the table courtesy of a 1-0 victory at Mestalla against Valencia.

Atletico have thrived so far this season in stark contrast to the markedly below-par Barcelona and Real Madrid and look well-placed to seriously challenge for the league title.

Simeone, speaking after the game in comments carried by Marca, spoke of how pleased he was with the dominance showed by his charges throughout their win.

“We felt very good and we were able to really live in the opposition half, close to the goal, and so when we found the goal is opened things up for us,” he said.

“Winning in Valencia is not easy. They’d just come from a good result against [Real] Madrid and had come back from 2-0 down against Alaves.

“They played with a lot of order, but we dominated.”

The Argentine sprung a surprise pre-game by starting with attacking stars Joao Felix and Yannick Carrasco on the bench.

When asked about his decision, Simeone spoke of the collective strength of the squad at his disposal.

“They’ve known me for a long time now,” he said. “The game is 90 minutes long and I can make five changes.

“This group gives me the possibility to experiment and give minutes to each player. I’m very happy with [Thomas] Lemar, for example, who performed very well today.”

Another attacking light who was missing for Atletico was Luis Suarez, the Uruguayan marksman who has been out of action since testing positive for COVID-19.

Simeone revealed he’s not far from a return.

“The doctor will keep us informed,” he said. “He’s fine, and I’ve spoken with him a lot to see how he feels. He’s very enthusiastic about coming back and his presence in the dressing room gives us strength and leadership.

“The team needs him.”

Simeone paid tribute to his compatriot, teammate and friend Diego Maradona before kickoff at Mestalla. Maradona, who died aged 60 on Wednesday, was being remembered by a moment of silence.